What is Your Purpose in Life?

To talk about your purpose in life sounds a bit over the top. I'm sure it sounds like I've bit off more than I can chew. I mean, isn't this the question that everyone really wants to know the answer to, the question that sends seekers off to climb to the top of the highest mountains of Tibet to ask the guru for the answer to that one elusive question: "What is the meaning in life?"

It sounds like arrogance to say, "Listen up, I have the answers!" And it would be insufferable arrogance if I were saying that I have figured everything out. I haven't. No one could figure it out. But it doesn't mean that the answer isn't there, that the answer hasn't been waiting there for us all the time.

What do I meant? I mean that the Answer is actually a person. A person who is loving enough to care deeply for you, knows you through and through yet isn't put off by what He finds there, and powerful and capable enough to actually make a difference in your life if you will let Him.

Yes, by now I'm sure that you have figured out that I am talking about God. But to get any further we have to be sure which God and which person we are talking about. God is far more than just a nebulous concept that I can mentally assent to, as in, "yeah, I'm sure there's something out there. Or, yeah, I believe in a higher power!" These days a lot of people seem to think that God is what we make Him out to be, as if He is a concept that we give life to by making Him up in our heads.

How can we know who God is and what He is like? To be honest, WE can't. We're dealing with a Person who can be experienced, but not one who can be seen and scientifically observed or reproduced in a test tube. It doesn't make Him less real, just hard to figure out or observe from this side of the one-way-mirror. The only way we can know Him is if He decides to step out from behind the curtain and tell us who He is, and show us who He is.

It is worthwhile getting to know him, because your purpose in life is inseparable from this Person.

You know, I'm not going to take the time here to try to convince you that God exists or that the Bible is His word and the revelation of Himself. There are plenty of sources in the internet and in books that do a fine job of doing that. There is plenty of evidence out there that God is, and that you don't have to switch your brain off to believe in Him.

The Bible isn't that hard to figure out, if you want to let it speak for itself. It talks about what your purpose is. It says clearly enough that this Person we've been talking about is the Creator. More than that, He has revealed a number of things about Himself. He says that He is love, yet completely just. He is completely good, without an ounce of evil or self-centeredness in Him.

He is humble, not concerned about pleasing anyone (in the sense of having to justify Himself to anyone - on the other hand He loves to please the ones who draw near to Him.) He has all knowledge. He doesn't need anyone to inform Him about anything. He has all power - so completely, that even His enemies only have a delegated power, that came from Him in the first place. (The fact that they still have it is because He was willing to give them a chance to chose to do right and choose to love Him. Since He's completely consistent, He doesn't take it back when a person misuses their free will.)

He identifies Himself also by a name: Y'hovah (pronunciation of this name isn't certain.) He is the God of Israel. He has a Son, with whom, together with the Holy Spirit, He is in complete unity. Without explaining exactly how, the Bible simply identifies God, Elohim in Hebrew, as 3 Persons who together are God.

What does this have to do with your purpose in life? Just this: This God of Israel, the Creator, of all that is, has stated that it was for love of you and me, - for love of the blind beggar in India, the starving man in Ethiopia, the worn-out prostitute in Amsterdam, the stressed German businessman, the transvestite in San Francisco, the spoiled rich kid and the suburban housewife - that He made this world.

"He chose us in Him before the foundation of the world, that we should be holy and without blame before Him in love, having predestined us to the adoption of children by Jesus Christ to Himself." Ephesians 1:6-

In a sense you could say that this world is a proving ground. Or better yet, a forge. It's not a grand cosmic experiment as much as it is the stage or the background scenery on which a drama is played out, a drama which is not to entertain, but to answer a very important question. This question has everything to do with His purpose in making us, which was to have a people who would love Him and on whom He could pour out His love.

The question is: How will we respond to Him?

It might not sound like a very important question, but in essence it means - will He receive from us what He made us for? Will we become the people who will recognize that there is more to this world than meets the eye? Will we choose to go beyond merely thinking about it in order to actually become seekers of God and eventually lovers of Him? As Jesus said, "But the hour comes and now is, when the true worshippers will worship the Father in spirit and in truth, for the Father seeks such to be his worshippers." John 4:23

Your purpose in life is to know God. Not as an act of intellectual knowledge, but as a person with whom you interact on a daily basis. Knowing him, even learning to obey him, will give great meaning and fulfillment to your life.

Have your say about what you just read! Leave me a comment in the box below. 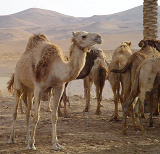